Instances of large-scale crop damage and loss of livestock due to wild animal attacks are not unheard of in the rural parts of India. Such occurrences are mere news items for urban citizens, something that is easily forgettable, but for the people residing near wildlife reverses, it’s an everyday reality.

After graduating in Environment Education in 2018, I chose to intern with the Centre for Wildlife Studies (CWS). This month-long internship was an intriguing learning experience, to say the least, that helped me gain a new perspective towards the issue of human-wildlife conflict and the lack of awareness of the same. My urge to contribute to the cause got me an opportunity to join CWS as an educator for their WildShaale program. This program works towards mitigating human-wildlife conflict through Environmental Education.

Urban folks are known to turn into armchair activists when discussing wildlife conservation related topics. While there may be awareness among them on issues like endangered species, deforestation, wildlife land encroachment, etc., seldom much thought is given to the adverse effects on the lives of the people dwelling around wildlife reserves and national parks.

In the last 10 years, we have witnessed an improvement in the implementation of wildlife Conservation measures, which has led to an increase in the population of wildlife especially tigers and elephants which are strictly protected. At the same time the human population in these areas is also at a rise, inevitably leading us into a situation where the human-wildlife conflict reaches enormous proportions in the villages that surround these national parks / wildlife reserves

For human-wildlife conflict related calamities, our governments have made provisions of relief packages for the people who may have been affected.  Even though it is an ideal solution on paper, when one actually observes the ground reality, we see that a lot of money allocated for damages due to human-wildlife conflict does not end up reaching the affected people. There are two reasons why this is happening-:

The loss and damage caused by these conflicts leaves the affected people with a lot of anger and grievance. Their natural instinct is taking these negative emotions out on the wild animals.      There are many instances where the farmers would bait wild animals with poisoned meat which would result in a number of leopards and tigers dying. There are instances where the entire village would get together to kill elephants after crop damage.  When we watch videos of these events on social media, we feel rage towards such human beings who are trying to kill wild animals . But when one looks at the whole picture you realize that many of these village residents have lost an entire year’s earnings because of elephants destroying their crops, lost livestock or a lost a loved one due to an attack by wild animals, this is the only way they know how to express their anger and helplessness.

An immediate solution would be to make the process of acquiring relief funds easy for the people affected in conflicts. This could be done through:

These solutions are being experimented with and implemented in recent years by NGOs and the Forest Department of  Karnataka. Data reveals that the efforts are working to a great extent, making compensation funds reach the farmers and as a result reducing human-wildlife conflict.

Once the compensation schemes are fulfilling their purpose entirely, attention need to be diverted to increasing awareness among the village residents about the process of seeking aid at the time of calamity, improving their understanding and influencing empathy towards wild animals. This is the focal point of the WildShaale program.

The program sessions introduced environmental topics  and lead up to information on how to deal with conflicts.  The four session program designed for the age group of 10-13 years would include Presentations, Projects and Games planned by experienced educators and psychologists to make them engaging.

A game being played with children during a session of Wildshaale. 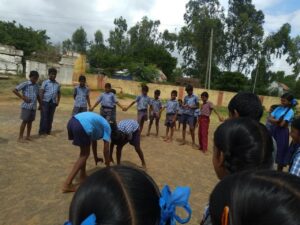 The program targeted pre-teens because it has been found that children in that age group are more open to intervention especially for issues related to empathy or behavioral change. These programs were targeted at schools in villages surrounding national parks. The sessions were designed in a way where after each session the children would usually take something back home, for example in the first session, children colored tiger and leopard face-masks and took them home. This resulted in children having conversations with family members back home about what they had learnt in the sessions, this was the short-term impact of awareness and empathy that was being created. 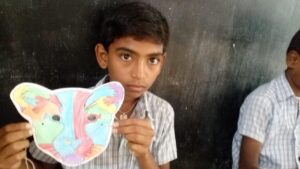 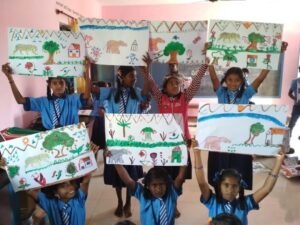 The long-term impact is that these children would grow up to become adults with more empathy and awareness about wild animals and know exactly how to handle these conflicts. To test the efficacy of the program, pre-test and post-test evaluations took place which      showed us the difference in empathy levels of the students. One may argue that it is difficult to evaluate empathy among kids, but the increase in knowledge and awareness on the topic was very evident to evaluators. In my opinion, the true efficacy of the program will only be seen in the long run, when future data of conflicts and deaths can be compared with the present data to test the program’s efficacy. 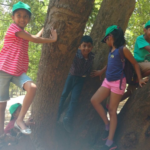